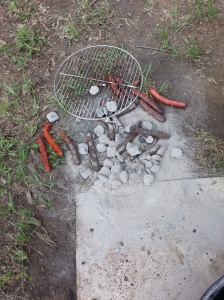 The smoke-permeated backyard patio is the “Fortress of Solitude” for the hero known as “Dad”. In fact, nothing says “dad” like the smells of charcoal, fire, and frankfurters. Whereas the kitchen is a mom’s castle and all peasants are banished from her space (until it’s time to load the dishwasher) the grilling area is the original man-cave where the resident dad attempts to perfect his craft. For years, he toils in the heat, one Texas summer after another in pursuit of the holiest grail of them all, the steak or burger cooked to perfection. He employs all the resources he is afforded but often finds frustration in the coals that won’t light up without a gallon of jet fuel poured on them. Eventually he gives in to the propane which seems a flawless technique, only to learn the 15.00 lesson of failing to shut the valve on the tank. Indeed, grilling is his kryptonite.

Throughout the years, he visits other worlds whose resident dads grill their own super-burgers. He takes what he learns from them, but his results are an accumulation of hockey puck patties and ones shaped like the state of Louisiana. Fortunately, he knows he can always fall back on his signature dish, the fail-safe, the hot dog.  Franks are forgiving as they cook evenly and quickly. He can feed 10 people for roughly 3 bucks without the fear of sending them to the hospital. Of course, he’s not invulnerable. There’s always the possibility of clumsily tipping over the grill and watching 16 franks fall to their deaths as hot coals rain down upon them. Though Dad escapes 3rd degree burns, his heart is singed. He groans in agony if for a moment, shakes his head in self-blame, but shakes it off altogether. There’s no time to cry! People are arriving and another fire must be started! Replacement franks must be secured! Another 3 bucks must be spent! Our hero must rise from the ashes of coal and processed meat and come to the rescue! “To the Dad-mobile!..the store….back to the Dad-mobile, and back to the fortress!……must feed the hungry…must grill!”